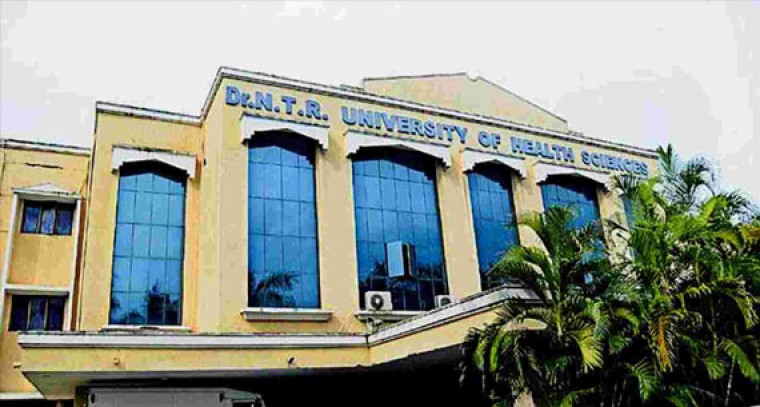 Amaravati, Sep 21 (IANS) A proposal by the Andhra Pradesh government to rename NTR Health University as YSR Health University has kicked up a row with the main opposition Telugu Desam Party (TDP) hitting the streets to strongly oppose the move.

The State Legislative Assembly and Legislative Council witnessed ruckus on Wednesday as the TDP legislators stalled the proceedings demanding the government to drop the move.

All TDP members were suspended from the Assembly as they disrupted the proceedings. On the orders of Speaker Tammineni Seetharam, marshals physically lifted them out of the House.

As soon as the Assembly met for the day, TDP members were on their feet to lodge their protest against 'The Dr NTR University of Health Sciences (Amendment) Bill 2022'.

They rushed to the well and raised slogans of 'NTR Amar hai' and 'Johar NTR'. Holding placards, the agitating legislators tore papers and threw them on the Speaker.

The health university is currently named after the late TDP founder and former Chief Minister N.T. Rama Rao, who was popular as NTR.

TDP president and former Chief Minister N. Chandrababu Naidu slammed the Jagan Mohan Reddy government for its move to change the name of the university. He said that the move shows the bankruptcy of the government.

Demanding that the name of the university should remain unchanged, Naidu vowed to strongly oppose any attempt to rechristen it.

Naidu questioned the move to rename NTR Health University that was founded in 1986. "The university was formed by NTR, how can you rename it after your father," Naidu asked Jagan Mohan Reddy.

Naidu, who is son-in-law of NTR, told the Chief Minister that changing name of the existing institutes will not give him popularity and advised him to bring new institutes to the state.

Meanwhile, the police have beefed up security at NTR Health University in Vijayawada as large number of TDP leaders and workers were reaching there to stage a protest.

TDP leader Devineni Uma and other leaders were arrested by the police for staging protests.

It was in 1986 that NTR formed a separate health university to promote medical education in united Andhra Pradesh. After the death of NTR, then chief minister Chandrababu Naidu named the university after the late leader.

Naidu said no chief minister including Jagan's father YSR thought of changing the name of the university.

The TDP leader said the chief minister who failed to set up a single new institute in the state during the last three-and-a-half years was changing the name of the university.

He alleged that the government took away Rs 450 crore funds of the university and did not conduct even a single convocation.