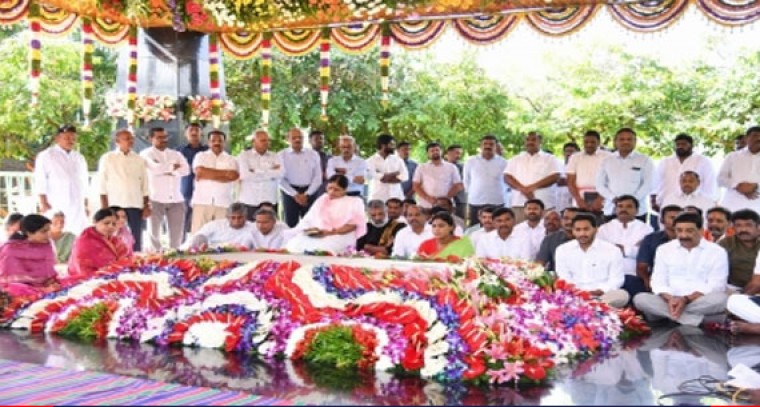 The chief minister attended a prayer meeting and paid floral tributes at the YSR Ghat, at Idupulapaya in YSR Cudappah district here on Friday.

His mother Y.S. Vijayamma, wife Bharathi Reddy, relatives, well wishers and party leaders were among those who attended the prayer meeting.

Taking to twitter the chief minister said: "Though (my) father has physically left us his effervescent smile and (fond) memories are with us. He had redefined welfare for the first time in the country and proved that (fulfilling) peoples' aspirations is the main feature of governance. This Government is going forward in his footsteps in the true spirit."

Dr Rajasekhar Reddy was an undisputed Congress leader of undivided state of Andhra Pradesh and led the Congress to victories in the state during 2004 and 2009 elections. The Congress sweep in Andhra Pradesh during these two elections contributed in large measure to the party winning power at Centre from 2004 to 2014.

However, he could not complete his second tenure as chief minister as he lost his life in a helicopter mishap.

After the Congress high command refused to consider him for the post of chief minister following his father's death, Jagan Reddy formed the YSRCP and stormed to power in the 2019 Assembly elections in the residuary state of Andhra Pradesh.