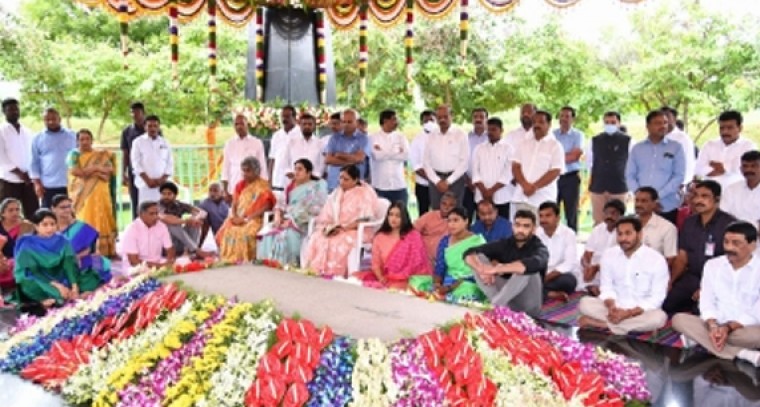 They participated in the special prayers conducted on the occasion by a priest and sat in silence for a few minutes.

Jagan Mohan Reddy arrived at the grave when Vijayamma, Sharmila and others were already sitting there. Sharmila and her children along with Vijayamma left the place after paying floral tributes before the chief minister laid a wreath.

Sharmila's husband Anil Kumar, an evangelist, was not seen.

Differences reportedly cropped up between Jagan Reddy and her sister after she floated a political party in Telangana. It was exactly a year ago that, Sharmila announced YSR Telangana Party (YSRTP)

Jagan Reddy, who is president of YSR Congress Party (YSRCP), was against her sister's foray into Telangana. Vijayamma, who is honarary president of YSRCP, had blessed her daughter at the launch.

Anil Kumar also recently hinted at floating a new political party in Andhra Pradesh. He met leaders of various groups of backward classes, scheduled castes, scheduled tributes and minorities in Visakhapatnam to discuss the problems faced by them. "Since they had extended support (to YSRCP) on my appeal, it's now my duty to stand by them. I can't go back on my word," he had said.

Sharmila, Anil Kumar along with Vijayamma had campaigned for YSRCP in 2014 and 2019 elections. After YSRCP came to power in 2019, differences cropped up in the family.

Y. S. Rajasekhara Reddy, popularly known as YSR, was the chief minister of undivided Andhra Pradesh from 2004 to 2009. The Congress leader died in a helicopter crash on September 2, 2009, a few months after he led Congress party to second consecutive electoral victory.

Meanwhile, YSRCP leaders and workers paid rich tributes to the late leader on his birth anniversary across the state. The party organised various programmes to mark the occasion.