There is no national party except BJP: Nadda 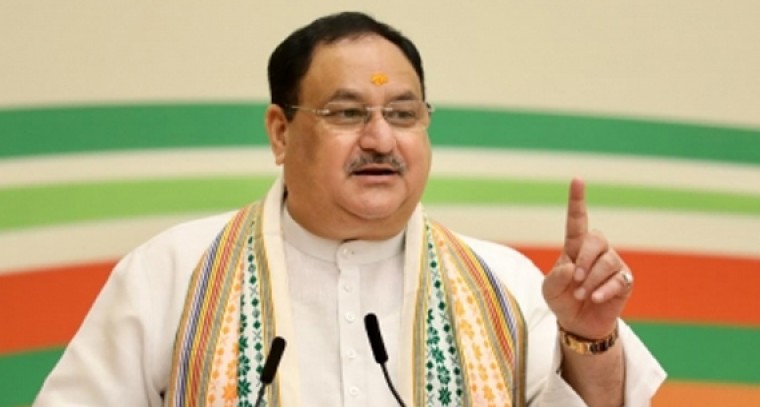 Vijayawada, June (IANS) BJP president J.P. Nadda on Monday claimed that there is no national party left in the country except BJP.

He told party workers at a meeting here that BJP's fight is no longer with any national party in the country. "If there is a national party, it is the BJP. We are fighting against family rule," he said listing out the parties in various states.

Addressing heads of shakti kendras and workers here, Nadda described Shiv Sena as a party of father and son. He said Jagan Mohan Reddy led YSR Congress Party (YSRCP) and Telugu Desam Party (TDP) both are dynastic parties. He also remarked that the Indian National Congress has been reduced to a brother-sister party.

Nadda claimed that Narendra Modi has changed polity and political culture of the country by eliminating family centric, caste and community based politics, appeasement and corruption.

Stating that Andhra Pradesh has a special place for BJP, he recalled that out of two MPs that BJP once had from the entire country, the state had sent one MP. He called upon party workers to strengthen the organization in the state.

He said out of 10,000 Shakti kendras in the state, appointments have been made for more than 6,000 kendrs while appointments will be made in remaining kendras soon. He pointed out 4-5 booths come under each shakti kendr and there are 10.40 lakh booths in the country.

Stating that there are 46,00 booths in Andhra Pradesh, he urged their heads to reach to all booths, hold meetings with workers and bring new workers to the party fold. He called for enrolling members from all sections of the society including Dalits, tribals and minorities.

He claimed that Arogyasri scheme being implemented in Andhra Pradesh is not the scheme of the state government but it is the central government's scheme.

"Ayushman Bharat has been changed as Arogyasri by Jagan Mohan Reddy. It's not Jagan's scheme, it is Narendra Modi's scheme," he said.

Nadda asked BJP workers to explain to people that if covered under Ayushman Bharat they can get medical treatment in any other state in the country to the tune of Rs 5 lakh a year.

He also asked them to arrange booth level meetings on the last Sunday of every month to listen to Prime Minister Modi's 'Mann ki baat' programme. "All workers should gather and listen to Mann ki baat, discuss and eat together by exchanging food carried from their houses," he said.

Nadda also asked party workers to hoist BJP flag on every house, go door to door for mass contact, arrange speakers to address people explaining the government schemes. He advised them to meet five new people every day and invite them to join the party.