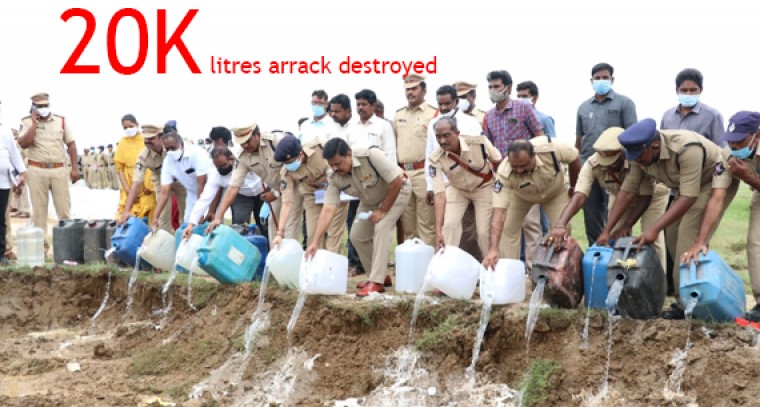 East Godavari district police and the Special Enforcement Bureau (SEB) seized 20,480 litres of arrack in separate raids which was destroyed in the presence of Superintendent of Police (SP), M. Ravindranath Babu.

SEB Joint Director A. Rama Devi and Assistant Commissioner M. Jayaraju were also present during the destruction of the banned arrack, popularly known as 'saara' in Telugu.

"Coordinated efforts by the district police and SEB resulted in the seizing of this huge quantity of arrack," Babu said.

The SP also appealed to the general public to tip-off the police if they get any information about illegal distillation or sale of arrack and narcotics by dialling 9490618510. The identities of the informers will not be disclosed, he added.

Despite numerous efforts by the police and the SEB, illegal distillation of arrack continues unabated in the southern state.

On Thursday, the police in Visakhapatnam had destroyed arrack at two places -- Appalapalem (4,500 litres) and Puttadigairampeta (1,000 litres).

Deepak Dobriyal: Want to come out of cliche of 'challenging roles'

Suriya on 'Jai Bhim' character: Justice Chandru has not charged a penny