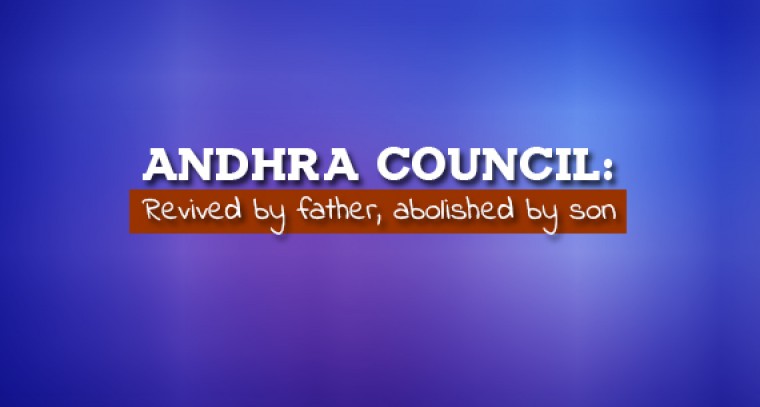 The Andhra Pradesh Legislative Council, the upper house of the state legislature, is set to become history with the Assembly on Monday adopting a resolution to abolish it, for the second time in 35 years.

Nearly 13 years after the Council was revived by then Chief Minister of undivided Andhra Pradesh Y.S. Rajasekhara Reddy, it is now being abolished by his son Y.S. Jagan Mohan Reddy.

The passing of unanimous resolution in the Assembly has set in motion a lengthy process which involves passing of a Bill in both Houses of the Parliament.

In 1985, Andhra Pradesh became the first state to abolish the Council as then Chief Minister N. T. Rama Rao had done away with the House of Elders, citing it to be a burden on the state exchequer. However, the real reason was the fact that his Telugu Desam Party (TDP) lacked majority in the Council and opposition Congress, which was dominating the House, was stalling key Bills passed by the Assembly.

Jagan Mohan Reddy cited similar grounds for his move and for him, the villain is the TDP. He was irked by the last week's development when the Council referred two Bills to a select committee, thus delaying the process for creating three state capitals.

The TDP has 34 members in 58-member Council while the YSR Congress Party (YSRCP) has just nine members. Opposition Progressive Democratic Front (PDF) has 6 members, Bharatiya Janata Party (BJP) two members and Congress one. There are three independents and three seats are vacant.

Jagan, as the Chief Minister is popularly known, felt that the TDP is misusing the Council for political gains by stalling the Bills passed by the Assembly, directly elected by the people.

The YSRCP, which came to power in May last year with a landslide majority, has 151 members in the 175-member Assembly.

It was in 2004 that then Congress government headed by Jagan's father initiated the process to revive the Council. Then Leader of Opposition and TDP chief N. Chandrababu Naidu opposed the move, interestingly on the same grounds which Jagan cited during the debate in the Assembly on Monday.

Chandrababu Naidu and all his party MLAs stayed away from Assembly to protest against the "undemocratic" move by Jagan government. In a one-sided debate, Jagan played the video clippings of Naidu's speech in Assembly in 2004 to expose his "double-standards" on the issue. He also played a latest video in which Naidu is seen assuring TDP leaders that the TDP would revive the Council after it came back to power.

Jagan explained how Council has no public utility and how it was used as rehabilitate Centre for the politically unemployed or those defeated in the direct elections.

Jagan, however, did not refer to the arguments put forward by his father in the Assembly in 2004 to justify the resolution for reviving the Council. "It was a decision by then Congress government. Jagan is a successor of his father and not the Congress party," YSRCP spokesman Ambati Rambabu later explained before the media.

The state Legislative Council was first constituted on July 7, 1958 under Article 168 of the Constitution and inaugurated by the then President Dr Rajendra Prasad.

Jagan argued that that was the time when literacy rate was low and a need was felt to have intellectuals and academicians in the Upper House.

"Today the situation has changed. We have many well-educated members in the Assembly. The Council is no longer required as it is only serving the purpose of delaying the process of passing of bills and proving a burden on public exchequer to the tune of Rs 60 crore annually," he said.

It was Congress government at the Centre under Rajiv Gandhi's stewardship that passed a Bill in the Parliament to abolish the Council, despite stiff opposition from state Congress leaders who argued that the move was against the party's interests in the state.

In 1990, the then Congress government made an attempt for revival of the Council but in vain. The Congress in its manifesto for 2004 Assembly elections promised to revive the Council and Rajasekhara Reddy got a resolution passed in the Assembly immediately after coming to power.

Jagan had made no such promise in his election manifesto but the developments of the last few days, especially with regard to three capital Bills, compelled him to remove the roadblock.