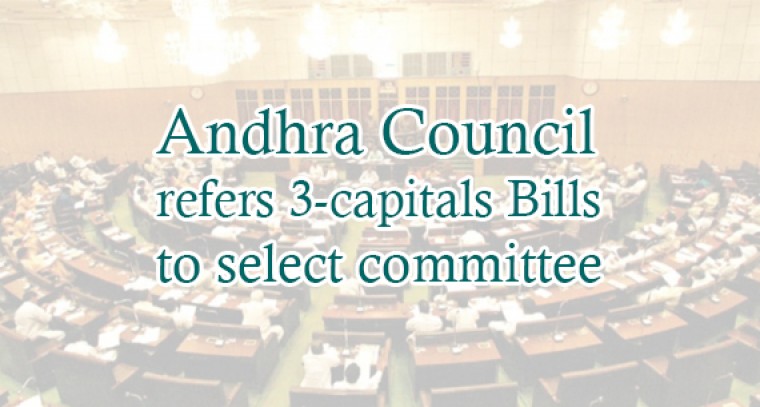 In a huge jolt to the Jagan Mohan Reddy-led government in Andhra Pradesh, the state Legislative Council Chairman on Wednesday referred two Bills for creating three state capitals to a select committee.

After day-long suspense over the fate of the Bills, Shariff gave his ruling.

Legislative Affairs Minister B. Rajendranath Reddy termed it as black day in the state's history.

The YSRCP wanted the chairman to take up the Bills for voting while the TDP, which has majority in 58-member upper house, stuck to its demand that they be referred to a select committee.

The Andhra Pradesh Decentralization and Inclusive Development of All Regions Bill and Capital Region Development Authority Repeal Bill were passed by the Assembly on Monday.

With the Council Chairman's move, the process of creating the three capitals may be delayed by three months.

There are indications that the government may abolish the Council.

Earlier, pandemonium forced the chairman to adjourn the House. However, leaders of both the parties including ministers queued up at his chambers to press for their demands.

The ruling party leaders had believed that even if the Bills are rejected in the Council, they will be sent back by the Assembly and if the second time, the upper house rejects the Bills, they will be deemed approved.

The TDP also demanded the Chairman to disqualify its two members who defied the party whip to vote against a TDP resolution on Tuesday.

In a setback to the government, the resolution disapproving the government's policies was adopted in the Council on Tuesday night.

The resolution moved under Rule 71 was approved with 27 members voting in favour of it and 13 members voting against it. Nine members abstained from voting.

Though four opposition members including two of TDP resorted to cross-voting, the resolution was still adopted, causing embarrassment to the government.

The YSRCP has just nine members in 58-member Council. The TDP has 34 members.