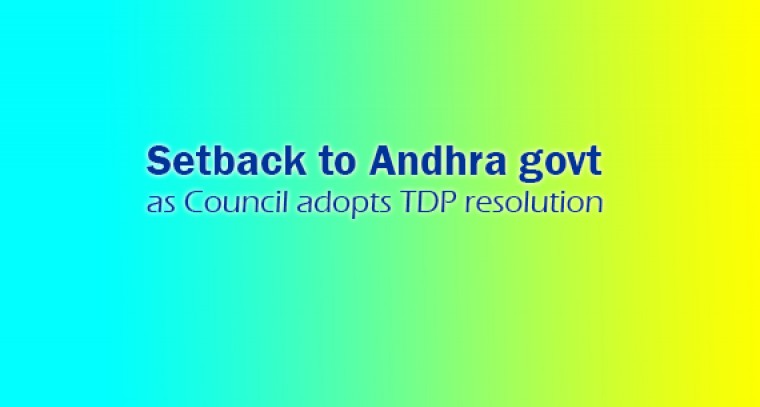 In a setback to the YSR Congress Party government in Andhra Pradesh, a resolution moved by main opposition Telugu Desam Party (TDP) disapproving the government's policies was adopted in the state Legislative Council on Tuesday night.

The resolution moved under Rule 71 was approved by the Upper House with 27 members voting in favour of it and 13 members voting against it. Nine members abstained from voting.

Though four opposition members including two of the TDP resorted to cross-voting, the resolution was still adopted, causing embarrassment to the government.

The development could deal a blow to the government's efforts to get two Bills passed in the House on Wednesday for creation of three state capitals.

The Bills were passed on Monday by the Assembly, where the YSRCP has absolute majority.

The approval of TDP resolution created doubts on whether the government would be able to move the two Bills in the Upper House on Wednesday.

TDP President N. Chandrababu Naidu told reporters that the government was defeated both morally and technically. "There should be no debate on the Bills tomorrow," he said.

The Leader of Opposition said if the Bills were brought for discussion, more members would join the TDP in voting against the Bills.

The voting on Rule 71 was taken up by Council Chairman Mohammed Ahmed Shariff after day-long suspense, pandemonium and repeated adjournments. He had to face angry protests from YSRCP members including ministers for allowing the TDP resolution before taking up debate on the Bills.

The YSRCP has just nine members in the 58-member Council. The TDP has 34 members.

The entire opposition is against the government's move to develop three state capitals. They are demanding that Amaravati should continue as the only state capital.

The TDP's surprise and other developments in the Council on Tuesday triggered speculations that the government may move to abolish the Upper House.