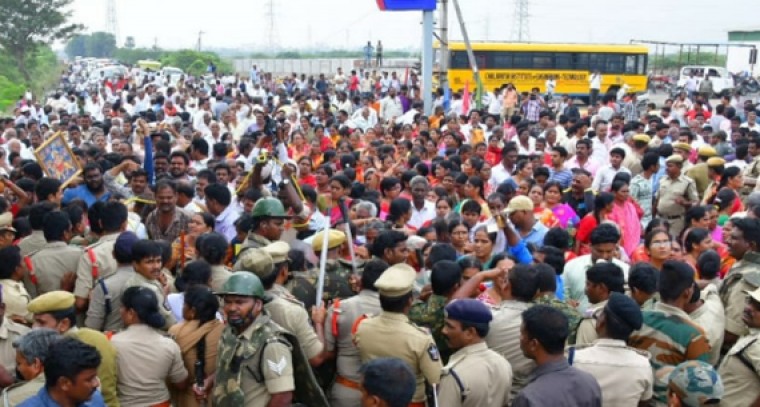 Several opposition leaders were either detained or placed under house arrest in Andhra Pradesh as protests rocked Amaravati and surrounding districts on Monday, ahead of a crucial Assembly session where the state government is likely to announce its final decision on three capitals proposal.

Tension prevailed as people took to streets to demand that Amaravati be continued as the only state capital.

There was high tension at Tullur village as large number of farmers and other villagers tried to march towards the Assembly in response to the 'chalo Assembly' protest called by main opposition Telugu Desam Party (TDP) and Joint Action Committee (JAC) fighting for protection of Amaravati as the state capital.

The protesters, including women, removed police barricades to proceed towards the Assembly.

Meanwhile, the police detained hundreds of TDP workers and protestors trying to reach Amaravati from Vijayawada, other parts of Krishna, Guntur, Prakasam and other districts in the state.

Thousands of policemen were deployed in Amaravati, Vijayawada and surrounding towns to prevent protesters from heading towards Assembly.

The Prakasam Barrage across Krishna river, which connects Vijayawada to Amaravati, has been sealed for traffic.

Police threw a thick security cordon around the secretariat and Assembly and sealed several roads.

The meeting is understood to have approved report of high-power committee on decentralization of development and state capital and also gave its nod for the Bills to be tabled in the three-day Assembly session.

A Bill to repeal Capital Region Development Authority (CRDA) is likely to be passed by the Assembly to facilitate shifting of key capital functions from Amaravati to Visakhapatnam and Kurnool.

The YSRCP government proposes to develop Visakhapatnam as administrative capital and Kurnool as judicial capital while retaining Assembly in Amaravati.

For more than a month, farmers in all 29 villages of Amaravati have been staging protests, demanding that Amaravati be retained as the only capital. The farmers had given 33,000 acres of land for development of Amaravati as the state capital in 2015.

TDP President and Leader of Opposition N. Chandrababu Naidu termed Monday as a black day for the state.

He alleged that the Chief Minister was destroying the dream capital of people to settle political scores with him.