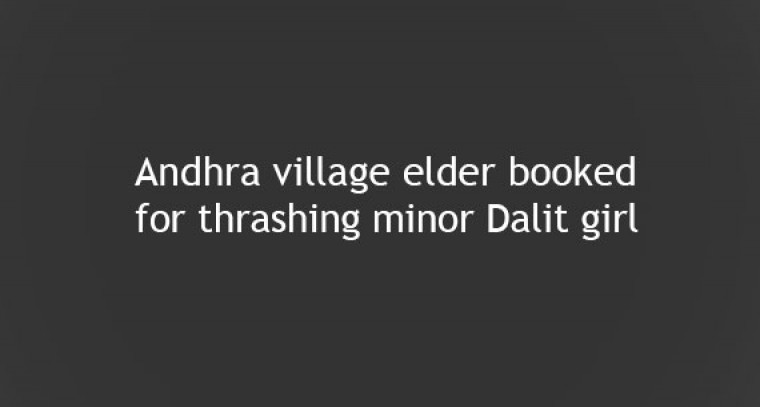 Amaravati, Aug 17 (IANS) Police in Andhra Pradesh's Anantapur district on Saturday booked a village elder for thrashing a minor Dalit girl in public for eloping with a youth.

Boya Lingappa was booked under the Scheduled Caste and Scheduled Tribe (Prevention of Atrocities) Act on Saturday, a day after the horrific video of the incident went viral.

The youth, who was also thrashed by Lingappa, was booked under the Protection of Children from Sexual Offences (POCSO) Act.

The cases were booked after a Deputy Superintendent of Police, Mandal Revenue Officer (MRO) and other officials visited K P Doddi village and conducted an investigation into the incident that occurred on Thursday.

Police swung into action following the public outcry over the video of the incident that went viral on social media.

The investigation officers visited the girl's house and recorded statements of her family members. Police said action would also be taken against those who stood in silence as Lingappa thrashed the couple.

The 17-year-old girl was beaten up by 70-year-old Boya Lingappa during a village panchayat in which she and her 20-year-old cousin Sai Kiran were pulled up for eloping and bringing a bad name to their families and the village.

At the panchayat, the couple was made to sit down and humiliated in front of all villagers. Enraged over the girl's refusal to stop having any relation with the youth, Lingappa started thrashing her, first with bare hands and then with a stick. He even kicked her and thrashed Sai Kiran.

The girl's parents had approached Lingappa after she eloped with the boy 10 days ago. When the couple returned, Lingappa was called to hold the panchayat.

Anantapur District Superintendent of Police, B. Satya Yesu Babu, had earlier said they received no complaint from the parents of either the girl or the youth. However, based on the video evidence a suo moto case was registered against Lingappa under Section 324 (voluntarily causing hurt by dangerous weapons or means) of the Indian Penal Code.

Meanwhile, various Dalit organisations staged protests in Anantapur district, demanding justice for the girl and stringent punishment to those involved in thrashing her.