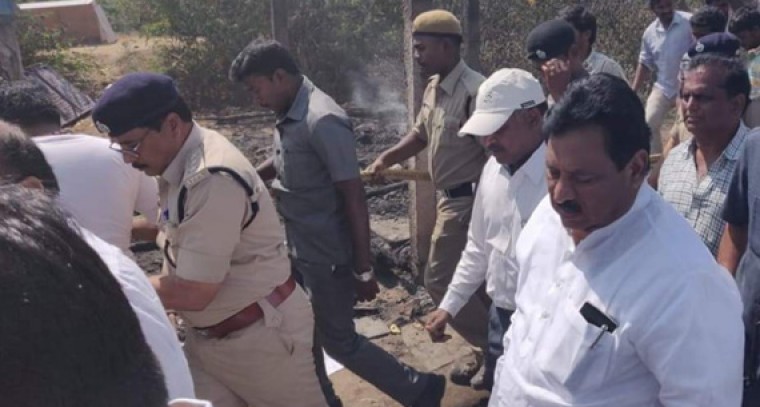 More than 33 houses were gutted, displacing around 133 persons, in a fire that broke out due to short circuit at Jangalam Colony in Kontamuru of Rajamahedravaram rural on Monday morning. Four fire tenders were  pressed into service; they struggled for an hour to douse the fire.

Deputy Chief Minister and Home Minister N Chinarajappa, who visited the spot along with rural MLA Gorantla Butchiah Chowdary and District Collector Kartikeya Misra, said that the State government would extend all possible help to the victims.

Stating that it was unfortunate that the victims suffered the fire accident for the second time, Chinarajappa said that the victims would be provided with permanent houses at an estimated cost of `2.5 lakh each.He directed the officials concerned to provide the victims with a temporary shelter and give `8,000 in cash, 10 kg rice and blankets as interim relief.

Gorantla said necessary infrastructure such as roads, drinking water, electricity among others would also be provided soon. The Collector said that the construction work for the news houses will begin early December. He said Chief Minister N Chandrababu Naidu has instructed officials to extend proper care to the fire accident victims.