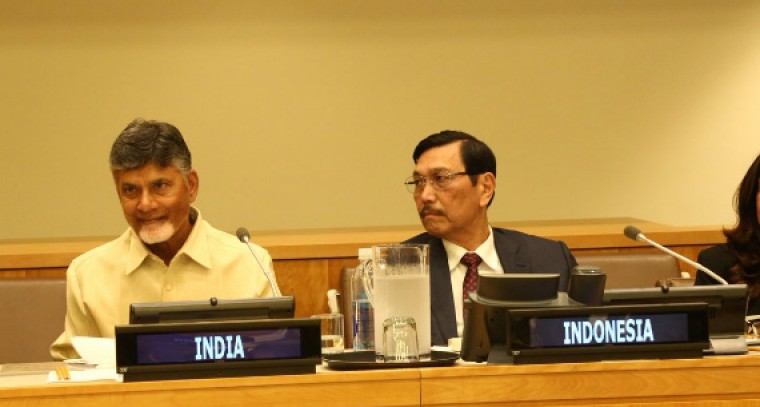 AP CM Chandrababu Naidu has taken many by storm by addressing the United Nations in Telugu briefly. Impressing the gathering at the UN headquarters, Naidu spoke in Telugu for two-minutes. The Chief Minister of Andhra Pradesh said he was going to use the rare opportunity to speak at the UN in his mother tongue - Telugu.

Stating that 62 percent of AP's population is employed in agriculture and its allied industries, Naidu said AP is becoming the hub of natural farming. Naidu, who admitted that he had promoted technology in the past, said he is now promoting both technology and nature together. Chandrababu said AP is encouraging zero budget natural farming to reduce costs and risks in farming, more and safer food with nutritious values, reverse migration to villages and enhance soil health to safeguard our collective future.

Mission 2024 : AP to be Top State in Natural Farming

In his presentation on natural farming at the UN headquarters, Naidu explained how Mission 2024 plans to make AP as India's top state in natural farming. He said this involves 60 lakh farmers covering 8 million hectares of farm land. Chandrababu also stressed the huge advantages AP has. He said AP has the second longest coastline in India of 974 km and is the largest producer of fruits, eggs and horticulture over 1.7 million hectares.

Chandrababu also said that microbial seed coating, bio inoculants, cover crops, mulching, soil aeration and zero chemicals will be promoting the living soil concept. Naidu said that the target is set to make villages of AP into bio villages in 5 years. Chandrababu said that with the help of women's self help groups, community resource persons and technology, 6 million farmers will be involved in zero budget natural farming and this will help to reach sustainable development goals.