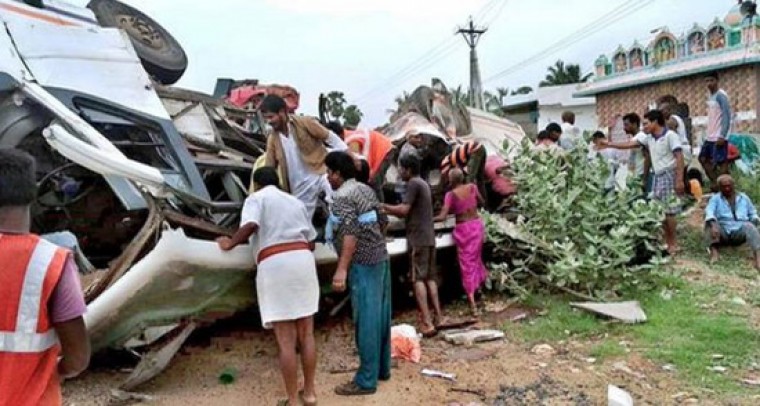 Three pilgrims were killed on the spot when two lorries coming from opposite direction hit the private bus in which they were travelling near Polipalli village of Bhogapuram mandal in Vizianagaram district around 3.30 p.m. on Wednesday.

As many as 28 other passengers of the bus received injuries and were admitted to various hospitals in Visakhapatnam and Vizianagaram. The deceased were identified as Karnam Venkanna (60) and Bhisetti Achhayamma (58) and Kalagana Appala Narsi (51). All of them belonged to Yelamanchili mandal of Visakhapatnam district. According to police, the accident occurred when about 50 pilgrims were returning to their native villages in Yelamanchili and Narsipatnam mandals from Varanasi (Kasi) in Uttar Pradesh.

The lorry drivers were reportedly trying to overtake each other. The drivers of both lorries and the bus also received injuries.After a Herculean task, the two drivers were brought out from badly mangled cabins. The locals of Polipalli village rushed to the accident spot and took up relief measures.Minister for Mines Sujay Krishna Ranga Rao has expressed shock over the incident and assured maximum support to the families of the victims.

Vizianagaram Collector Hari Jawaharlal, who was in Parvatipuram division at the time of the accident, had given instructions to police, revenue and medical and health departments to ensure quick help to the victims.Vizianagaram SP G. Pala Raju and other senior officials took steps to clear the traffic jam on busy national highway which connects Chennai and Kolkata. The police officials felt that over-speeding of the lorries had led to the accident.